Liberals Will Defend Islam to the Death, Quite Literally

Recently I was talking with someone who said, “Can’t I be against Islam without being a racist?” It told her she’d get no argument from me. We agreed that the problem with Islam is that, as a religion, it’s committed to the destruction of liberty and freedom. Islam’s apologists will be quick to hysterically scream, […]

Recently I was talking with someone who said, “Can’t I be against Islam without being a racist?”

It told her she’d get no argument from me. We agreed that the problem with Islam is that, as a religion, it’s committed to the destruction of liberty and freedom. Islam’s apologists will be quick to hysterically scream, “But that’s not true of the moderate Muslims!”

Here’s where my conversation partner made an interesting point. She said, “I’m a Christian. I would never sympathize with, nor in any way support, a group that, in the name of Christianity, blew up buildings or murdered people they considered infidels. Those things anger and upset me no matter who does them. But I’d be outraged if it was done in the name of a religion that I value and support, Christianity.” 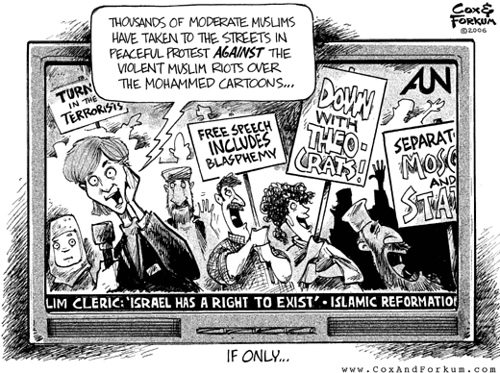 How many moderate Muslim organizations are protesting in the streets over the actions of those who terrorize (and promise to terrorize) in the name of Islam? If Islam is such a religion of peace, as both our current and previous Presidents have claimed repeatedly, then where are the moderate Muslims? And I don’t mean some kind of safe, tepid statement made at some meeting in Washington D.C., probably at the behest of some politician to ensure that the taxpayer loot keeps coming.

If I were Muslim and really believed Islam was a force for good, I would consider those promoting evil in the name of Islam to be the worst type of people imaginable. What would it say about my integrity if I refused to stand up to them? What would it say about my actual beliefs if I really didn’t have enough of a problem to speak out against them?

If Islam were really a religion of peace, the actions and statements of Muslims — starting with 9/11, but so much else past, present and undoubtedly future — would lead to such a state of revulsion on the part of those majority, peace-loving Muslims that you’d be hearing about it all the time. You hear Christians, for example, condemning the hypocrisy of fellow Christians who condemn people for being gay, or for having abortions. But you never hear Muslims talking about the outrageous behavior of their fellows who say things like, “There was no Holocaust,” or, “Israel should be nuked off the face of the map, and will be.”

Have you heard Muslims strongly opposing terrorism? Have you seen them calling for boycotts of those who in any way support terrorism in the name of Islam? Of course you haven’t. In fact, merely expecting them to do so is in itself an unspeakable act of — well, nonliberalism, which to liberals is the ultimate unthinkable thing.

Keep in mind that Islam also holds one distinction that no other religion, to my knowledge, shares: To impose its religious laws on the population. Conservative Christians get a lot of flak for trying to impose their will on the whole population about homosexuality and abortion. I share in giving them that flak. But when those who oppose conservative Christians on these points look the other way at Muslims who propose the same thing on a much, much wider and more hideous scale — what gives? Republicans favor laws outlawing abortion and trying to make marriage only between a man and a woman. Liberals and Democrats are outraged, and I agree. But these same liberals and Democrats know full well that gays are executed in the public square and women are treated, literally, as property in Islamic countries … and to point this out is condemned as intolerant!?

I also think about this issue with respect to the recent Lowe’s controversy. The Lowe’s home improvement store chain has withdrawn its advertisements for a pro-Islamic show. This is their right, is it not?

Not according to Islamic law, which would put to death anyone who dares defy its will. But also not according to liberals who now scream about the lack of tolerance displayed by Lowe’s in this instance.

Lack of tolerance? Excuse me? Why should Islam be tolerated? Islam is a religion openly dedicated to the annihilation of liberty, freedom and all things non-Islamic. Islam, left free to impose its will, would (like a tidal wave) wash away any notion of separation of Church and state, a bedrock of American liberty even (I thought) according to socialist liberal Democrats who run most of our society now. Again, what gives?

I’ve often thought that liberalism is motivated not just by intolerance and hypocrisy, but by a profound and almost bottomless emotional pit of self-hatred. Liberals, for example, despise capitalism and private property, yet they benefit from that social order (insofar as we still have it). Most liberals are very happy to enjoy their millions or even billions, when they have it. The ones who don’t have it take to the streets, as in the Occupy “movement,” urinating and defecating on the sidewalks and calling it principle. The greatest supporters of Obama and all things socialist are very well off.

These same liberals who are intolerant of those who won’t endorse or promote the most intolerant group of people in all of human history — the Muslims — are the ones with the most to lose by the fundamentalist society Muslims seek to impose by force. Few people are more secular in their lifestyles and attitudes than liberals and Democrats. (And I’m all for being secular, by the way.) So why is it so important to liberals that Islam, with all its intolerance, be allowed to impose its will without restraint or even question?

Inconsistency and self-hatred on such a scale, as liberal excuse-making for fundamentalist Islam, is too sick and twisted for even a psychologist to further contemplate.

Share
Dr Michael Hurd
Dr. Michael Hurd is a psychotherapist, columnist and author of "Bad Therapy, Good Therapy (And How to Tell the Difference)" and "Grow Up America!" Visit his website at: www.DrHurd.com.