Elián Gonzales, a 6-year-old Cuban boy, found Thanksgiving Day clinging to an inner tube off the coast of Florida, is about to be deported back to Communist Cuba on January 14, 2000, if the United States Immigration and Naturalization Service (INS) has its way. It was the objective of Elián’s mother before she and nine […]

Elián Gonzales, a 6-year-old Cuban boy, found Thanksgiving Day clinging to an inner tube off the coast of Florida, is about to be deported back to Communist Cuba on January 14, 2000, if the United States Immigration and Naturalization Service (INS) has its way.

It was the objective of Elián’s mother before she and nine other people drowned while fleeing Communist Cuba, for the boy to live in the United States where he would have the prospect of a bright future as a free man. According to the Clinton Administration, dictator Fidel Castro, and the father Juan Miguel Gonzalez (who demanded the return of his son after Castro did) Elián should be delivered back to Cuba.

Should Elián be deported to the slave state of Cuba or should he live with his paternal relatives in the United States as his mother wished?

Parents do not own their children but are their guardians who make decisions in their child’s best interest, until the child becomes an independent adult. Is it in Elián’s best interest to deport him to Cuba, to have Elián later die while trying to escape Cuba as his mother did? Would a rational father want his son to grow up to be a serf when he has the opportunity to live as a free man–an opportunity his mother died for?

In fairness to Elián’s father, given the lack of free speech in Cuba, we cannot know what the father’s real position is. In all likelihood, Juan Miguel Gonzalez wants his son to stay in the United States, and he would love to bring his new family in Cuba, that he acquired since divorcing Elián’s mother, to join Elián in America.

Unfortunately, according to the Washington Post, the last time Castro caught Cubans attempting to leave Cuba, Cuban officials sunk their boat while women were desperately trying to keep their children’s heads above water. Do you think that a man who does not blink an eye when it comes to sinking a boat with children honestly cares about Elián’s welfare?

Given Castro’s brutal human rights record, one can be certain of Juan Miguel Gonzalez’s fate if he even suggested joining his son in the United States — especially since Castro has coordinated rallies with thousands of Cubans demanding that Elián be brought back to Cuba. Such a slap in Castro’s face would surely result in Gonzalez spending years of his life in a Cuban prison not to mention the persecution that his new family in Cuba–a new wife and a three-month-old baby — would have to go through for his disobedience. It is understandable why Juan Miguel Gonzalez tows the Castro line: one cannot speak freely when a gun is held to one’s head.

If you were in Elián’s father’s shoes what would you do? How can one choose between the lives of ones loved one in Cuba and the life of your loved ones in America? Such is the impossible choice Elián’s father is placed in by Castro. Morally Gonzalez cannot be blamed for choosing either way — he was damned if he did, and damned if he did not. The Clinton administration and those in the media that support him choose not to take any of these facts into account.

Some commentators have asked what does Elián want to do. Elián is not old enough to make his own decision. However, if he were the person to make such a decision, what does Elián desire? Senator Bob Smith, R-N.H., a member of the Senate Judiciary Committee which has INS oversight, met with Elián and reported that Elián told him in Spanish: “Help me. I don’t want to go back to Cuba.”

The only proper interest, in this case, is that of young Elián Gonzales. What is in Elián’s best interest: Life in America or life in a tropical prison camp? The answer should be obvious.

It was obvious to Elián’s mother. Elián’s mother died trying to escape Cuba with her son. Elián’s mother found freedom worth the risk of dying for — and unfortunately, she did die, thanks to the Castro regime. Now, thanks to INS policy, backed by the Clinton administration, her death will be in vain.

Commented Elián’s cousin Marisleysis Gonzalez on NBC’s Today show, “I always thought this was a place of liberty, and they are not letting him keep that liberty. It’s always about the father. What about the mother? That [Elián live in the U.S.] was his mother’s will.”

The fundamental issue is not about “Florida’s large and politically powerful anti-Castro Cuban community” versus the “bond between parent and child” as one commentator insinuated (USA Today 7 Jan 2000). There is something far more important than the “parental bond” between Elián’s father and “the dignity of the Cuban people” as Elián’s father referred to his son in a Castro sponsored rally (observe that even Elián’s father admits that his son is first and foremost a political tool). That something is Elián’s inalienable right to his own life — in Cuba that right does not legally exist.

If Clinton were pro-American, i.e., pro-individual rights, he would condemn Cuba, China, and every other slave state, rather then seeking to appease them. If Clinton had moral fiber, he would grant custody of Elián to his paternal relatives in the United States, and demand that Castro allow Elián’s father and his family in Cuba to immigrate to the United States to be with Elián.

The blood of Elián Gonzalez’s mother is on Castro’s hands. The life of her son is in Bill Clinton’s. 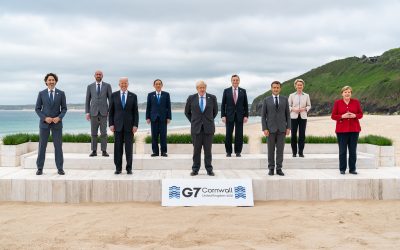 How To Defeat China Economically? Don’t Follow Its Worst Practices